Awards season may have come to an end last week, but we’re still in awe by the beautiful hair and makeup that emerged this season. From retro-inspired side-swept waves to bold red lips, celebs and their glam squads nailed all the latest beauty trends on the red carpet.

While we’re sad that it’s over, the beauty industry has one more ceremony to look forward to, the “Behind the Chair Stylist Choice Awards” this Sunday, March 10. Behind the Chair (BTC) is one of the biggest salon magazines along with an online site that keeps us informed with industry news, trends in haircuts, color and gives us strategies on how to build our business.

The ceremony will include a who’s who of celebrity stylists and educators and reveal winners of the best hair products, color lines and companies. It should be an entertaining night with “glittering awards” and categories like “Favorite Product You Can’t Live Without” and “Favorite Celebrity Stylist”. Too bad there has to be a big fat elephant the in room spoiling the event!

In this case the elephant is a cringe-worthy award category that has many salon workers baffled. How can BTC give an award to a “Favorite Chemical Smoothing Product/System” when these controversial products are making our industry sick?!?

Ever since this popular service hit salons nationwide, salon workers began suffering from major health problems. This sparked a government investigation that blew the lid off this industry when they discovered many Hair Smoothing Products contained massive amounts of formaldehyde, even though many were labeled “formaldehyde free”.

We count on these magazines to keep us informed, but when it comes to the biggest scandal to ever hit our industry, their lips are sealed shut, they pretend nothing’s happening and remember that elephant? They sweep him under the rug, but we all know he’s still there!

Since everyone else is so willing to give out awards we’ve decided to address this elephant and have a little ceremony of our own….

Welcome to the Pretty Toxic Best of the Worst Awards!

We’ve taken letters we’ve received from “sick” salon workers across the country, FDA’s “Adverse Event” reports that were made public in 2011, along with our own experiences and personal stories from our colleagues. Now let’s get started with our first award…

The award for “Best Formaldehyde Rash” goes to: Global Keratin

Rashes, burning skin, scabs and blisters in the nose and blisters on the head are common side effects of Hair Smoothing Products. Global Keratin definitely had the best “formaldehyde rash” caught on film!

Michelle Pippin Johnson developed welts and skin eruptions on her elbows and upper arms after her skin came in contact with her styling chair, which was in a section of the salon used for a Global Keratin class the day before, on her day off.

FYI, you don’t need to physically touch these products to get a “formaldehyde rash”. When the product is heated the formaldehyde turns into a gas, exposing everyone in the salon.

The award for “Most Eye Damage” goes to: Brazilian Blowout

All of these products may cause extreme eye irritation, blurred vision and burning, stinging, itchy, red and watery eyes, but Brazilian Blowout goes the extra mile with reported complaints of eye blisters, corneal abrasion and blepharitis. This is what happened to a stylist’s eye after performing a Brazilian Blowout on her client….YIKES!!!

Marcia Teixeira attempts to sugar coat excessive toxic formaldehyde with a delicious chocolate scent, but you know how the saying goes:  “You can put lipstick on a pig, but it’s still a pig”. This oinker’s rap sheet is as dirty as they come, causing bloody noses, rashes, sore throats, burning and watery eyes, migraines, sinus infections, coughing, wheezing and asthma.

The award for “Most Lawsuits” goes to: Brazilian Blowout

Brazilian Blowout found themselves in hot water with numerous state and federal agencies, but the water boiled over in California with their strict cosmetic and air pollution laws! The California Attorney General does not mess around and slapped the company with a lawsuit! This required the company to stop lying about being “safe” and “formaldehyde free”, use “caution stickers”, “cancer warnings” and pay a hefty $600,000 in fines.

Just when we thought it was over, the toxic product got taken off the market in California because it violates the states air quality laws. It’s taking months to determine if the new reformulated product being sold in the state falls within the smog limits….stay tuned for results!!

Brazilian Blowout also agreed to pay $4.5 million to settle a class action lawsuit for lying about formaldehyde and harming consumers. 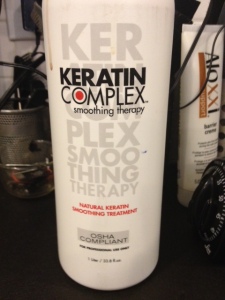 Amidst the controversy Keratin Complex announced in a press release “Keratin Complex Becomes First Smoothing Treatment to Receive OSHA Compliancy” and started printing “OSHA COMPLIANT” on their bottles. But guess what? OSHA does not certify the safety of products and the company is now currently under investigation for making false and misleading statements! Tsk- tsk -tsk Keratin Complex….now that was a bold move!

The “Most truthful MSDS from the get go” award goes to: Global Keratin

Global Keratin was one of the only companies honest on their MSDS from the beginning and actually listed “formaldehyde” in their ingredient list! (Most companies avoided the “F-word” like the plague or just didn’t list anything at all a.k.a. Brazilian Blowout.)

Do you think a client would still go through with this treatment if they knew the manufacturer classifies this product as: “Harmful, Irritant and Carcinogenic”?

The “Most truthful MSDS after getting busted” award goes to: Brazilian Blowout 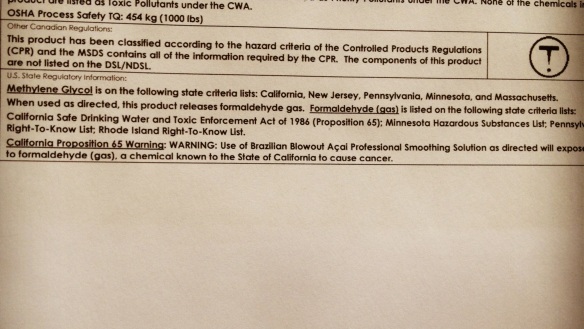 California Proposition 65 Warning: “WARNING: Use of Brazilian Blowout Acai Professional Smoothing Solution as directed will expose you to formaldehyde (gas), a chemical known to the State of California to cause cancer.” Would you like some cancer to go with that haircut??? 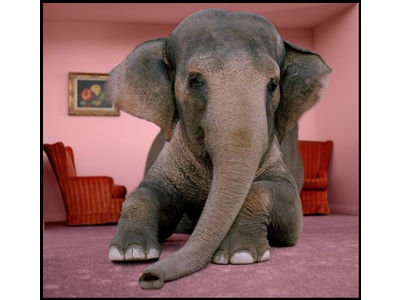 We sure wish Behind the Chair and American Salon Magazine would use their platform to address this issue and stop tip-toeing around the elephant in our industry.

Unless you’re in the zoo business….an elephant does not deserve an award!!

CLICK HERE for a hilarious follow-up on this story and see who won the award! Please tell us….“Are YOU Drinking the Keratin Complex Kool-Aide?!?”

Check out our latest post: How rock bottom became my stepping stone

24 thoughts on “Pretty Toxic’s Best of the Worst Awards!”